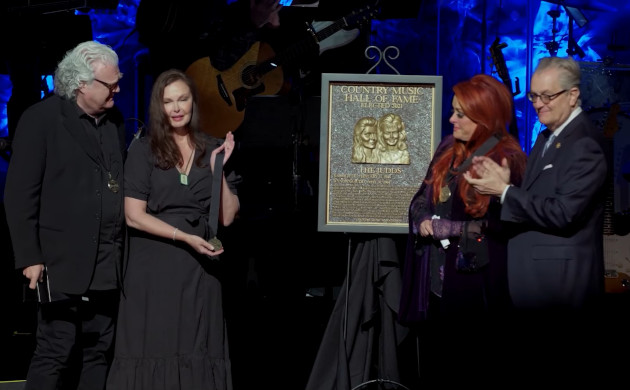 Over the weekend, Naomi Judd, half of the mother-daughter country music duo The Judds, committed suicide at the age of 76 after losing her battle with mental illness. Naomi Judd died just a day before The Judds were set to be inducted into the legendary Country Music Hall of Fame on Sunday evening. Daughters Wynonna, who spent decades singing beside her mother, and actress Ashley Judd, were present and spoke on their mother’s behalf.

During the ceremony, both daughters tearfully spoke about their mother and her love of music. “I’m sorry that she couldn’t hang on until today,” Ashley said to the crowd while wiping away tears. Wynonna talked about how she and her sister recited Psalm 23 with their family members, as they gathered to say goodbye to their mother. “Though my heart is broken I will continue to sing,” Wynonna stated. Video of the induction ceremony is available below via the Country Music Hall of Fame.

The Judds were among the most popular duos of any genre of music throughout the 80s and early 90s, scoring 14 No. 1 hits during their three-decade career. Daughter Wynonna wanted to pursue a solo career, so the duo took a break for several years, though they would reunite periodically to perform at various award shows and festivals.

Naomi Judd was an advocate for mental health awareness herself, and never shied away from talking about her illness. Quite the contrary, she appeared on various talk shows to discuss the topic and always freely spoke about her struggles when being interviewed throughout the years.

I grew up in the South, which makes it virtually impossible to grow up without becoming at least familiar with country music. As a young child, I didn’t have the best home life, so I spent a fair amount of time at my grandparents’ house during the summer and after school. As you could probably surmise, my grandparents were big country music fans and would frequently take me on trips to country music festivals in Nashville and Branson, MO. There was also the occasional trip to Dollywood, would I actually enjoyed, which, looking back now, explained a lot. But I digress. The Judds were one of the first musical acts I saw as a child, though I had yet to grow to appreciate music at all, much less country music.

I do remember appreciating their voices, their stage presence, and those costumes. As I grew older, the lyrics of The Judds’ songs like “Why Not Me” and “Love Can Build a Bridge” started resonating a lot more than I thought they ever would. I also experienced the ups and downs in the relationship with my own mentally ill mother, and could understand the strain it put on The Judds’ bond over the years. Although I later grew out of my country music phase, I always looked back on their music and their connection with fondness.

Rest in peace, Naomi. Thank you for the beautiful music.